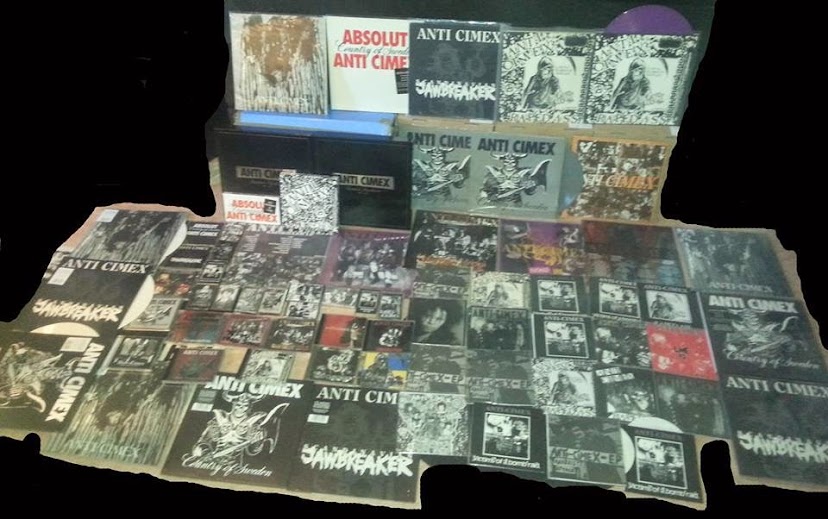 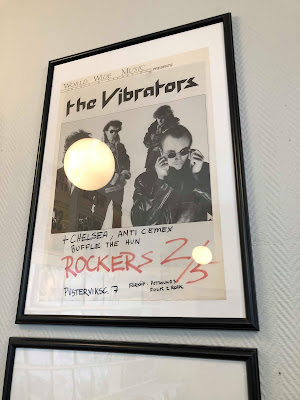 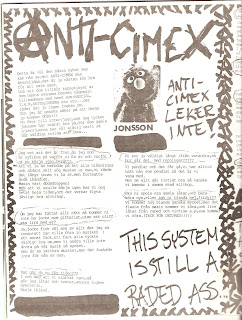 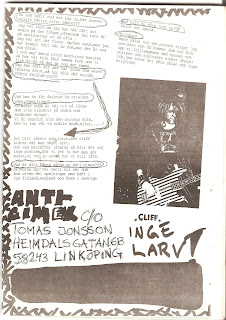 A couple of years ago I made a post with a poster and a movie from the Färjenäs Festivalen in Gothenburg which took place the 18-19th of May 1991. There was a short session of Cimex in that documentary (long enough to see Jonsson fall of the stage), but this clip here is about 12 minutes only featuring Anti Cimex. Enjoy!!!!
Upplagd av Masken kl. 01:38 Inga kommentarer: 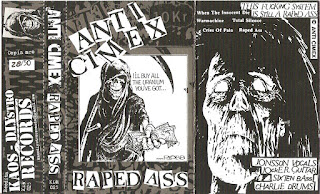 Yet another one of the 7'' released as a cassette. This time it's Raped Ass. Ltd in 50 copies released in 2016 by Kaos D.I.Ystro Records from Venezuela. And of course it's not official...
Upplagd av Masken kl. 10:28 Inga kommentarer: 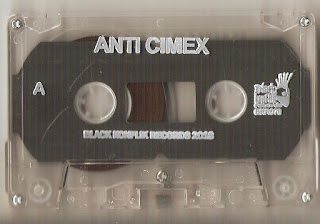 Black Konflik Records keeps them cassettes coming, and I think this is the 4th Cimex tape they release. This one is the same as the bootleg CD that came a couple of years ago with the same name and tracks. A gig from 1984 (Mölndal?) and the Leeds gig from the U.K tour. There isn't so much to say about this actually, haha 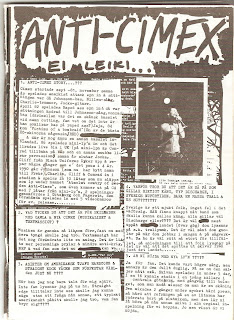 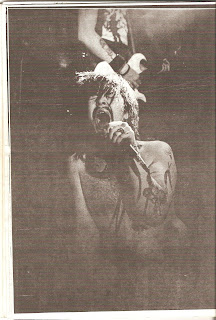 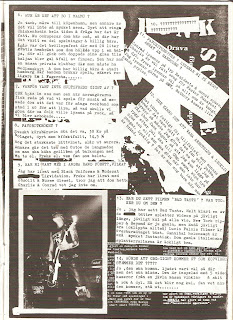 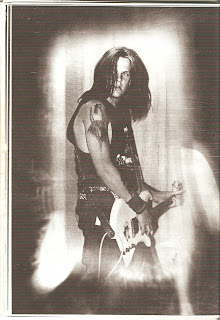 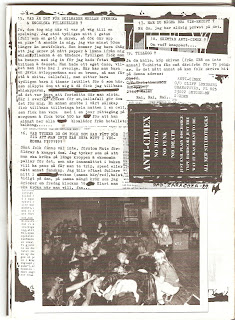 Haha, I really can't understand why I haven't posted this one earlier? Total failure from my side. But here it is anyway. From the now classic Swedish fanzine Sika Äpärä # 1. Answered by Cliff in 1990.
Upplagd av Masken kl. 02:59 Inga kommentarer: 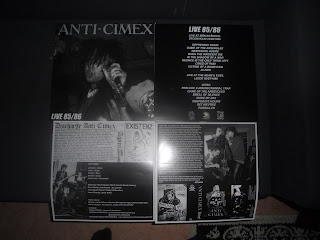 Finally the old cassette that Hardcore Horror made in a very limited amount is available for all of you (us)  thanks to Punk Vortex, Godzilla and Bastard Squad. The only thing I have to say about it is that I don't think the song "Alarm!" were recorded that same night. I think it was recorded on the other gig they did at Birkagården later the same year. But nevermind, I salute the three labels for releasing it on a proper LP. The B-side contains the gig from Leeds in July 1986. A masterpiece. Kom igen nu då era jävla rövhål!
Upplagd av Masken kl. 00:17 Inga kommentarer: 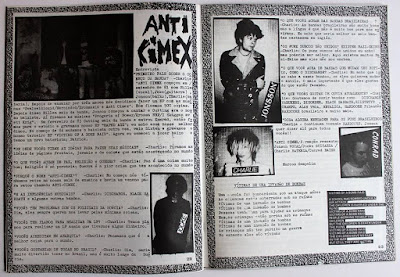 An interview from the Brazilian fanzine WC, issue 3. In the post at the official Anti-Cimex facebookpage it says that it is from 1987, but the interview itself is way older. 1984 to be exact, cause in one answer they are talking about their new drummer Patrik who did just one gig in 1984. Answered by Charlie. And since it is in Portugese, you'll find a translation here below made by Jonte Palmblad.

ANTI-CIMEX began in September 1981 with Nillen (vocals), Joke (guitars),Jonsson (bass), Charlie (drums). After rehearsing for three months we decided to make an EP with the songs "Svaveldioxid//Heroindöd/Drömmusik and Anicimex". We made 500 copies. After this Nillen left the band, Jonson started singing and Cutting became our bass player.Then we made the songs "Progeria of Power/Krossa NRP/I Skuggan av ett Krig". In February of '83 Cutting left the band and Konrad joined, then we went to the studio to record our EP "RAPED ASS": I think this to be our best record. In the start of '84 we changed bass player one more time, Sixten joined and we recorded our third EP "VICTIMS OF A BOMB RAID". Now I started playing bass and we have a new drummer: Patrick.FROM WHERE DO YOU GET THE IDEAS FOR YOUR SONGS?-Charlie: We get the ideas from front pages, newspapers and from things that are happening in the world.WHAT DO YOU THINK OF PEACE, RELIGION AND WAR?-Charlie: Peace is a really good thing; Religion is just bollocks; War is the worst thing that has happened in the world.WHY THE NAME ANTI-CIMEX?-Charlie: In the beginning we had rats in our rehearsal room and had a rat-poison called ANTI-CIMEX.AND THE MUSICAL INFLUENCES?-Charlie: DISCHARGE, BLACK SABBATH and some other bands.DO YOU HAVE PROBLEMS WITH THE THE SWEDISH POLICE?-Charlie: Yes, they always want to take us for the smallest things.DO YOU HAVE PLANS ON MAKING A LP? -Charlie: We have plans to make a LP as soon as we have some money.DO YOU BELIEVE IN ANARCHY?-Charlie: We think it's the best thing for the world.WOULD YOU LIKE TO PLAY IN BRAZIL?-Charlie: Yes, it would be a lot of fun playing in Brazil, but it's very far from Sweden.WHAT DO YOU THINK OF THE BRAZILIAN BANDS?-Charlie: I think the Brazilian bands are very good but it's the language that makes it not so good for us to listen to. I think it would be better if the bands sang in English.ARE THE SWEDISH PUNKS UNITED? THERE ARE NAZI-SKINS-Charlie: The Swedish punks are united I think! But it could be better. Here are a lot of nazi-skins but they don't harass us.WHAT DO YOU THINK OF BANDS WHO CHANGE THEIR STYLE, LIKE DISCHARGE?-Charlie: I think it's up to these bands, if they want to change style. The most important is that they like what they are doing.WHAT DO YOU LIKE TO LISTEN TO RIGHT NOW?-Charlie: We like listening to bands like DISCHARGE, VARUKERS, DISORDER, BLACK SABBATH, RIISTETYT, CRAMPS, ALAN VEGA, METALLICA, Finnish HARDCORE, Brazilian HARDCORE and a lot more.SAY SOMETHING FOR THE BRAZILIAN PUNKS-Charlie: continue playing HARDCORE. Jonsson wants to say hello to all of you!
Upplagd av Masken kl. 10:03 Inga kommentarer:

"The lost mixes" which was featured as a 7'' in the Swedish Hardcore boxset is now released as a cassette on the Malaysian label Black Konflik. Not much to say about it more than that I wonder why they didn't use pictures from the actual time?
Upplagd av Masken kl. 05:19 Inga kommentarer: 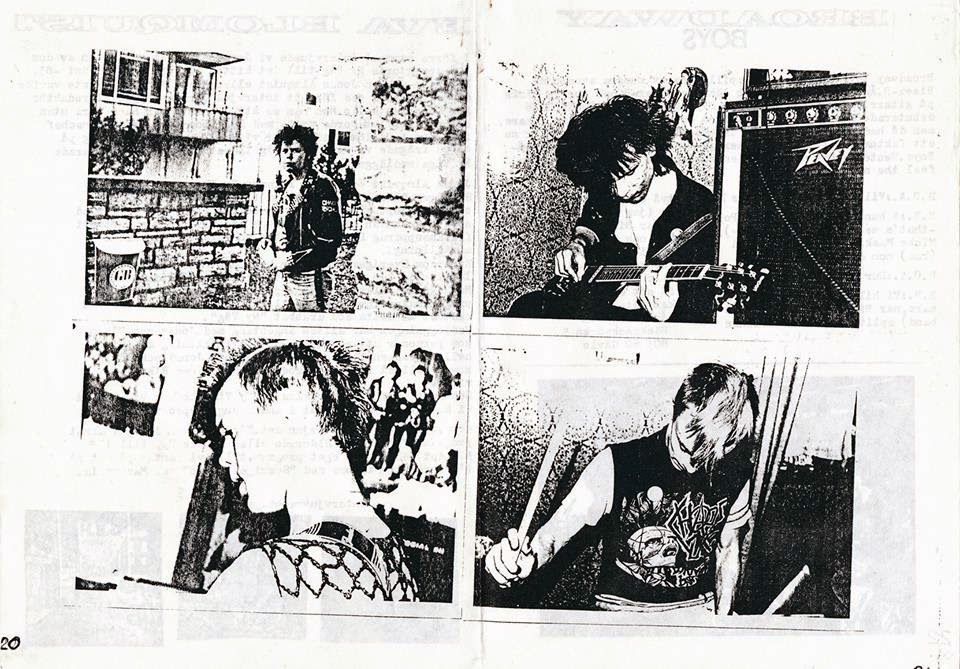 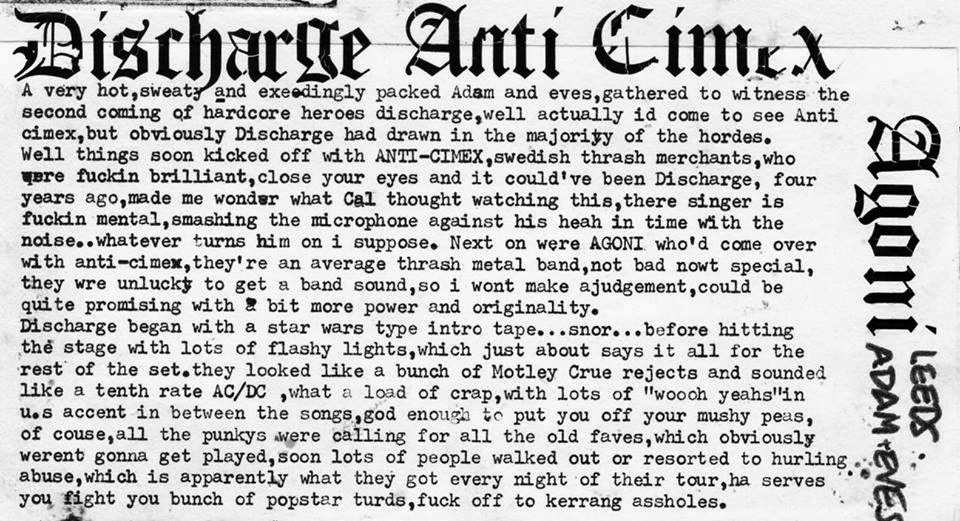 Interview from Dead Or Alive # 1 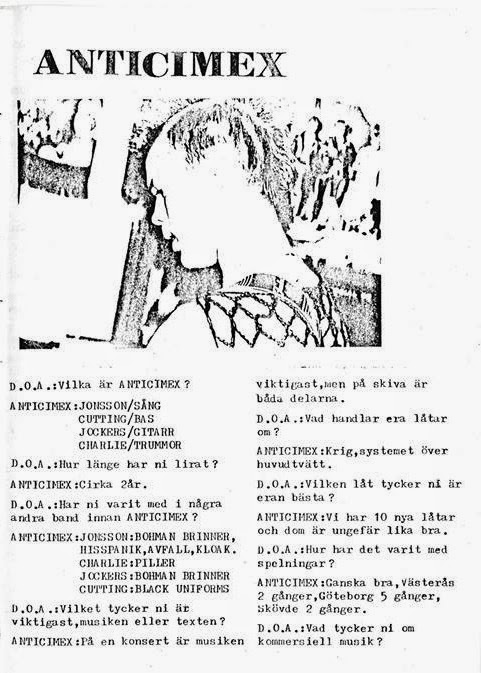 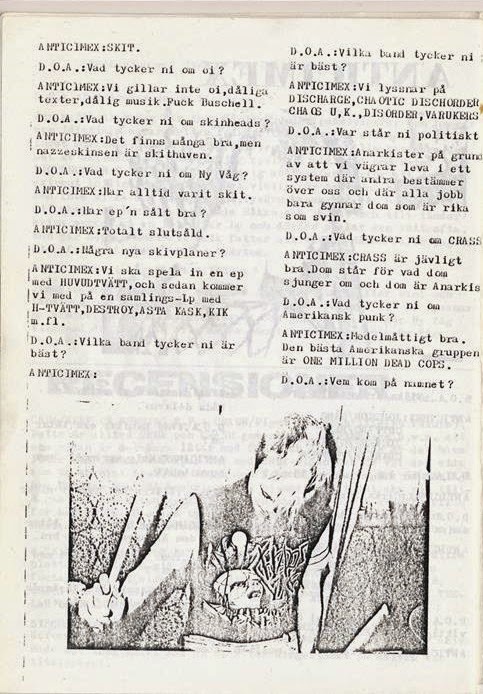 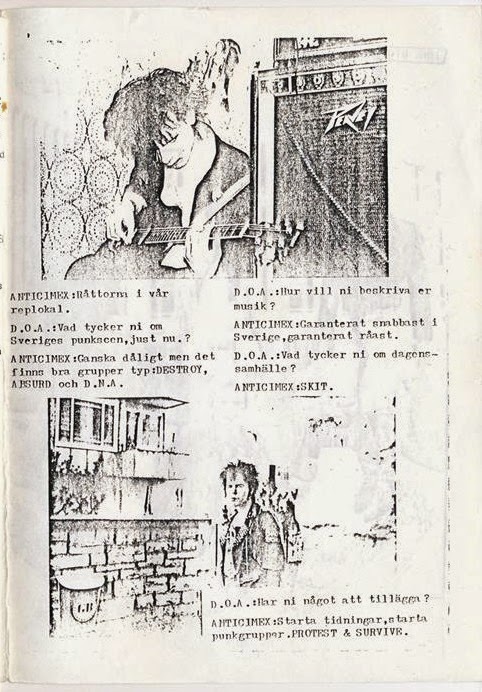 An interview from the Swedish fanzine Dead Or Alive # 1 from 1983, I don't know who have answered it but my guess is Jonsson. The editor of Dead Or Alive by the way, is the man behind the (in)famous Flashback Forum. And again, tons of hugs to Ia Hammar for scanning this.
Upplagd av Masken kl. 14:12 Inga kommentarer: 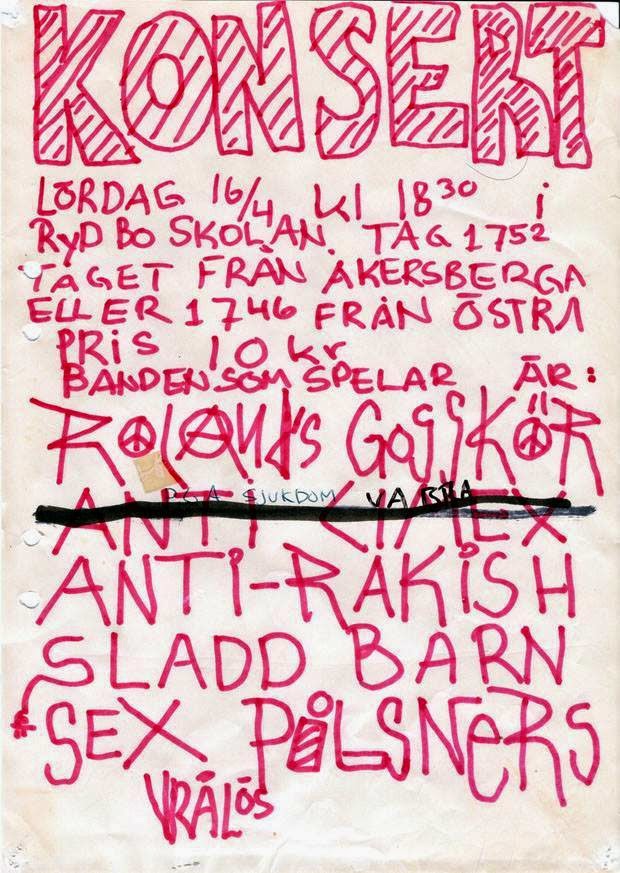 Yet another gig that didn't took off, This time due to illness in the band...
Upplagd av Masken kl. 13:28 Inga kommentarer:

Last summer I did a post about a bootleg splitcassette with Skitslickers , and here is one more for your enjoyment. No labelinfo whatsoever or when it's released. Both tapes have exactly the same songs on. The 3 first 7'' and the Absolut Country... LP. But as I said, no info at all about when or where it's from.
Upplagd av Masken kl. 06:57 Inga kommentarer: 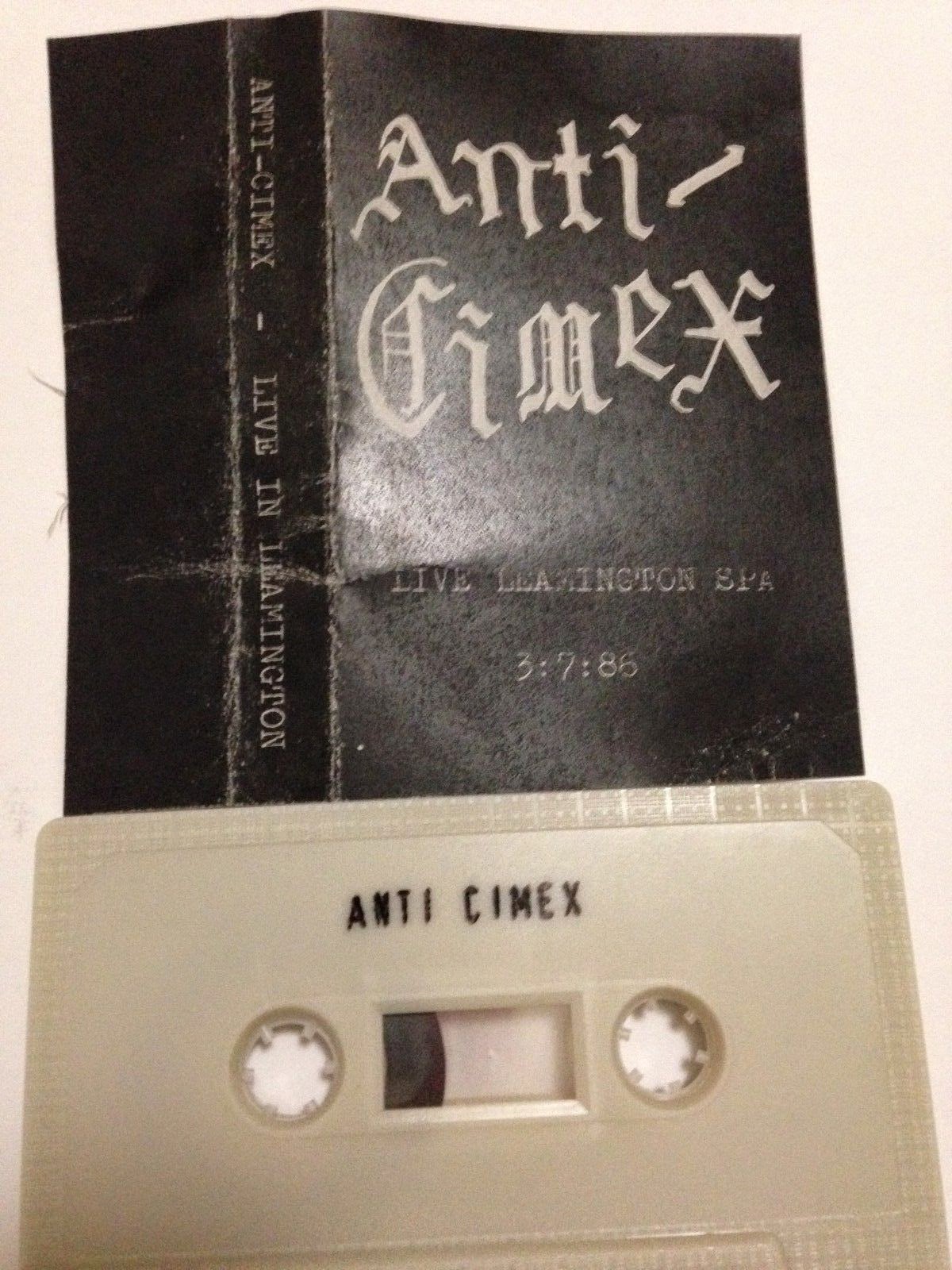 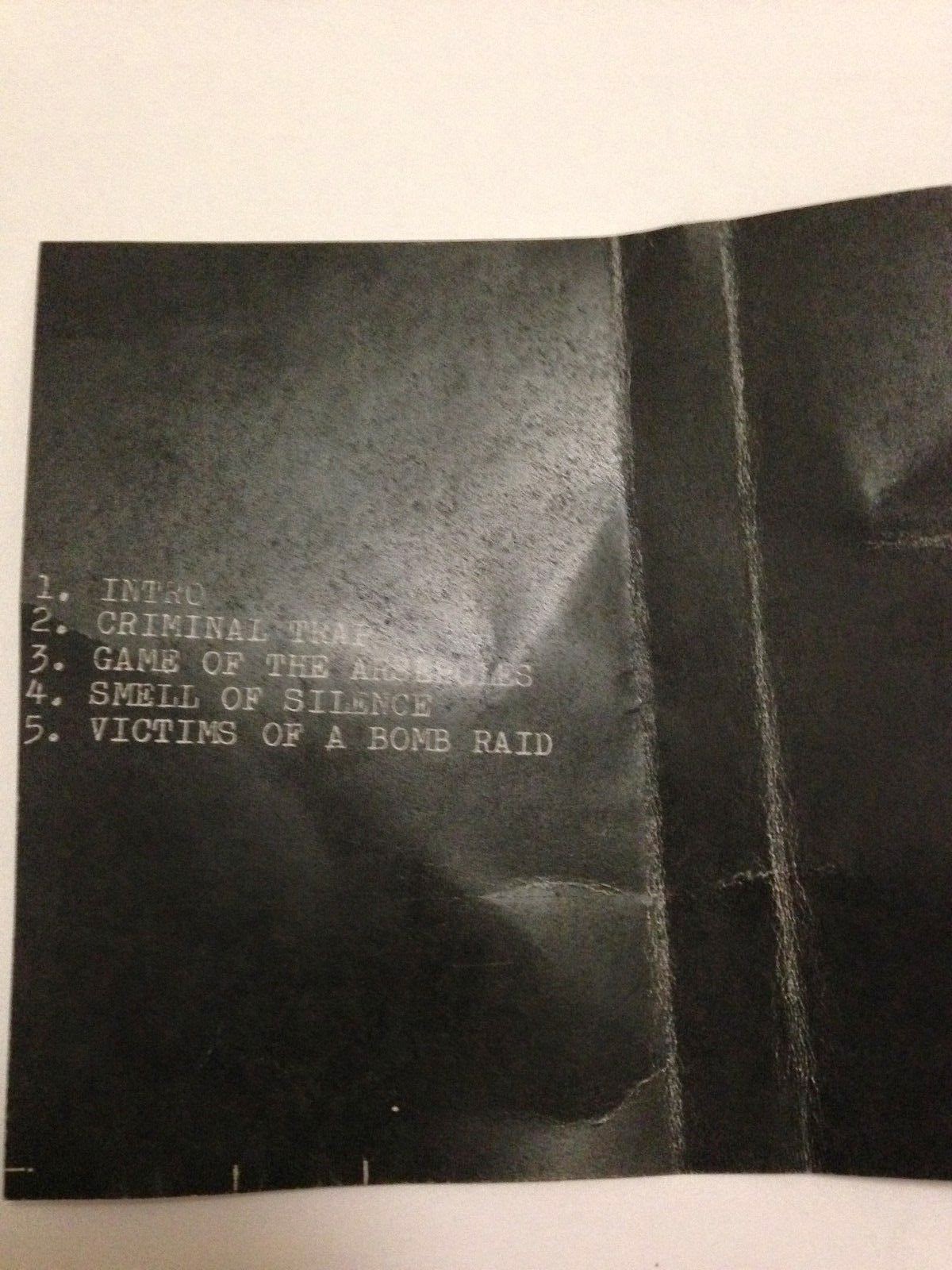 A livetape from the U.K tour in 86, this one is from the Leamington Spa gig. A bootleg of course, and I haven't seen before it appeared on eBay a couple of weeks ago.
Upplagd av Masken kl. 00:56 Inga kommentarer:

If you have something to contribute with please Contact me at maskenantabus@hotmail.com